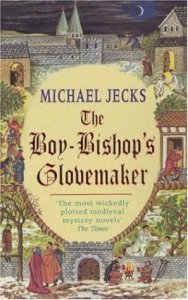 The Boy-Bishop’s Glovemaker is the tenth book in the Knight’s Templar series by Michael Jecks.

An engaging Christmas tale that brings the medieval past to life.  Sir Baldwin and Bailiff Puttock are very likeable main characters, and the mystery is cleverly-written.  Highly recommended! 5 / 5

Summary (from back of book)

For Sir Baldwin Furnshill, Keeper of the King’s Peace, and his friend, Bailiff Simon Puttock, the Christmas of 1321 looks set to be one of great festivity.  As a reward for their investigative services, they’ve been summoned to Exeter to receive the prestigious gloves of honour in a ceremony led by the specially elected Boy-Bishop.  But the dead man swinging on the gallows as they arrive is a portentous greeting…

Within hours, they learn that Ralph – the cathedral’s glovemaker and the city’s beloved philanthropist – has been robbed and stabbed to death.  When Peter, a Secondary at the cathedral, collapses from poisoning in the middle of Mass, the finger of suspicion turns to him.  Yet if he was Ralph’s attacker, where are the missing riches now?  And did Peter commit suicide – or was he murdered too?

When Simon and Baldwin are asked to solve the riddles surrounding the deaths, they soon find that many of Exeter’s leading citizens are not what – and who – they first seem to be, and that the city’s Christmas bustle is concealing a ruthless murderer who is about to strike again…

At one corner Ralph passed a few poorer folk huddled around a brazier of charcoal.  In the glover’s opinion they looked little better than heathens standing with their hands outstretched to the flames like priests worshipping fire…

First, let me begin by saying this is the first book I have read in the series – I have a number of the titles on my bookshelves but I wanted to read a medieval festive story so picked this one.  It reads perfectly as a standalone; I had no trouble getting acquainted with the main characters and didn’t feel like I needed to have read the preceding volumes prior to this one – but I shall be returning to read them all because this one was fantastic.

This is a cleverly written, complicated story showing the carefully intersected and interwoven lives of a community.  There is a lot going on here, and the cast of characters reflects that, as does the pace of the storytelling.  There is much action to be found, as well as twists and turns.  The identity of the culprit takes some fathoming out, but there are clues along the way if you’re astute enough to spot them.

I liked both Sir Baldwin and Bailiff Puttock.  I thought they were sensible and didn’t allow anyone else’s thoughts to interfere with their own conclusions.  I thoroughly enjoyed reading how Christmas was celebrated during the period.  It’s interesting that the tradition of the Boy-Bishop is reminiscent of the Roman festival of Saturnalia.

The story is well-researched (as attested to by the front matter in the book – a glossary, The Regulations for the Boy-Bishop at Exeter Cathedral after Bishop Grandisson (translated from the Latin by Margaret Cash), a cast of characters and an author’s note – but never once did I feel that it was too much, or too heavy-going.  The level of detail in the writing brings the early fourteenth century to life with ease.  I could clearly envisage where we were and who was there as we changed locations in and around Exeter and met all the different characters.

An engaging mystery.  I am looking forward to reading more from this series. Highly recommended!

3 thoughts on “Book Review: The Boy-Bishop’s Glovemaker by Michael Jecks”