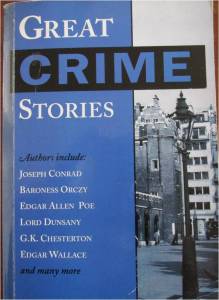 This short story was found in Great Crime Stories first published by Chancellor Press in 1936.

An interesting, engaging read from the ‘golden age’ of crime writing with a great twist at the end. 4 / 5

Harold Brownrigg is a chemist with a few money problems and a wandering eye.  His wife, Millie, is just dull and stupid, nothing like some of the pretty girls that come into his shop.  But none are so captivating as Phyllis, a young woman half his age.

However, Phyllis feels guilty about what they are doing even if he does not, and so decides to end it.  This is too much for Harold, especially when he hears that Phyllis has been seen about town with a younger chap in a flashy car.  It is becoming more and more obvious for Harold that Millie is just a problem he needs to get rid of.  Once he has got rid of her, not only will it clear the way for him to be with Phyllis but he will also be able to get his hands on the money left to Millie by her father.

And so begins the intricate planning of a murder.

Over-dark, round, hot eyes had Mr Brownrigg; not at all the sort of eyes for a little, plump, middle-aged chemist with a placid wife like Millie.

(From They Never Get Caught by Margery Allingham)

They Never Get Caught was an interesting, engaging read.  Written by one of the queens of golden age crime writing, this is the first story I have read by Margery Allingham (and as of 2019, I have read it twice), though I have a number of Campion novels sitting on my bookshelf.

I felt very sorry for poor Millie as I moved through the story.  Harold was extremely cold, even when he felt unnerved by what he was trying to do.

The story was cleverly written, and the number of characters and points of view from which we see what is going on, is handled very well given the story is told in under twenty pages.  The main POV is from Harold himself, though glimpses are provided by Millie and the errand boy Bill Perry.

The twist in the tale – which I won’t mention – was very good.  I didn’t expect it, probably because I was too preoccupied by the callous nature of Harold.

A short, satisfying read, if you like ‘golden age’ crime stories, then I would recommend They Never Get Caught to you.

7 thoughts on “Short Story Review: They Never Get Caught by Margery Allingham”