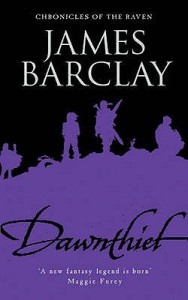 Dawnthief is the first book in The Chronicles of The Raven by James Barclay.

A solid, engaging start to a fantasy series, with a fresh take on magic, a fast pace and a cast of characters that is both varied and interesting.  3.5 / 5

The Raven: six men and an elf, sword for hire in the wars that have torn apart Balaia. For years their loyalty has been only to themselves and their code.

But, that time is over. The Wytch Lords have escaped and The Raven find themselves fighting for the Dark College of magic, searching for the location of Dawnthief. It is a spell created to end the world, and it must be cast if any of them are to survive.

They didn’t take a contract because they believed in the cause.  In fact the cause was largely irrelevant.  The job had to be made worth their while, worth their reputation and worth their attendance. Worth the risk.

(From Dawnthief by James Barclay, page 50)

I had tried to read this book once before, but for some reason really struggled to get into it.  However, I always try to give books a second chance if they sound like books I should love, and I’m so glad I did.  Although I found the start a bit of a slow burn as I tried to get acquainted with the world, characters and storyline, I did find the book engaging once I got into it.

There’s plenty of action and adventure to be found in the story.  In that respect, it reminded me a little of Stan Nicholl’s ‘Orcs’ series which I read last year, in as much as fantasy plus action equals a fast and energetic pace.

I enjoyed the world-building.  It mixed simple geography – the world is divided into two, with the “goodies” on one side of a mountain chain and the “baddies” on the other – with a more complex structure because of the magical colleges and the fractious relationship between other cities.  I also liked how magic worked in this world and how it differed between the colleges.

It’s a big book – my copy was over 500 pages – and in the beginning, when I was trying to get into the story, it felt a little overwhelming, but that was quickly replaced with eagerness to discover what was coming next, which to me often felt unpredictable and unexpected.

A couple of things didn’t make sense to me.  One was a strategy that seemed a little counter-intuitive in certain situations, and the other, which I won’t mention for fear of spoilers, I hope will make better sense as I read subsequent books in the series.  That being said, these two thins were not enough to severely limit my enjoyment of the book.

On the whole, I liked the characters and found them engaging with interesting back stories. The concept of The Raven was a good one, and as the theme of brotherhood runs through the book, you can see how it affects the characters and their motivations.

Sammi Loves Books Reading Challenge 2019 – I’ve chosen this book for challenge #16 in the list: a book you didn’t finish on your previous attempt to read it

One thought on “Book Review: Dawnthief by James Barclay”