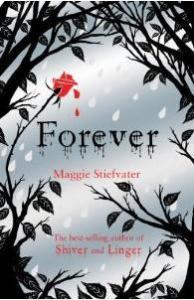 Forever is the third book in The Wolves of Mercy Falls trilogy by Maggie Stiefvater.

An enjoyable and fitting third book in the trilogy.  I love Maggie’s Stiefvater’s style of writing. 4 / 5

then.
When Sam met Grace, he was a wolf and she was a girl. Eventually he found a way to become a boy, and their love moved from curious distance to the intense closeness of shared lives.

now.
That should have been the end of their story. But Grace was not meant to stay human. Now she is the wolf. And the wolves of Mercy Falls are about to be killed in one final, spectacular hunt.

forever.
Sam would do anything for Grace. But can one boy and one love really change a hostile, predatory world? The past, the present, and the future are about to collide in one pure moment–a moment of death or life, farewell or forever.

Overhead, the stars were wheeling and infinite, a complicated mobile made by giants. They pulled me amongst them, into space and memories.

(From Forever by Maggie Stiefvater, page 85)

It had been a few years since I read and reviewed the first two books in The Wolves of Mercy Fall trilogy (you can read those reviews here: Shiver, and Linger), back in 2017.  So I thought it was about time I got around to complete reading the trilogy.

I like the way Maggie Stiefvater writes.  There is fluidity to passages and the imagery she paints with words is amazing (see Favourite Quote above).  There is just something very simple but full of impact in descriptions like that.

The setting for the story, by which I mean the natural spaces, is stunning.  I loved the descriptions of the woods, and as the story moved towards the final third / quarter, the pacing really picked up.

Grace and Sam were (of course) the stars of story.  Their romance and what it must survive and overcome is quite unlike anything else I’ve read, probably because the forces at work are so beyond either of their control.  Out of the two, Sam was my favourite: he’s got a lot going on but handles the pressure fantastically.  Grace, for all her intelligence, was more self-involved and seemed occupied with a fair few “I want to do / see…” thoughts, some of which didn’t really make sense to me, given the danger that was all around them.

Although it was interesting to see what was going on from Cole and Isabel’s perspective, and they do have their own storylines and parts to play in the overall story, which I appreciated, I sometimes felt they were a little too distracting.  However, that wasn’t the case each and every time the POV switched to them, but on occasion it felt like the story was moving further away from Grace and Sam.  What I learned as I was writing this review, and thinking that their story would have made a great spin-off, is that there is another book in this series, Sinner, that focuses on Cole and Isabel! Woohoo!  Another book added to the ever-growing TBR list…

One of the highlights of the series is how being part-human part-wolf is portrayed.  There are no “werewolves”.  There is no magic.  It’s not even paranormal, at least not in the way we often expect the paranormal to be.  It just is.  It’s more science and biology than anything else, and I think that really sets this story apart from other YA paranormal books that I’ve read.

One thing I didn’t really like about Forever was the ending, by which I mean the final chapter.  Although it completed the narrative of the trilogy, I felt it was left a little too open for it to feel satisfying.  It left me with more questions that I wanted answers to, but, overall, I enjoyed the story and was glad I finished the trilogy. Now I’m looking forward to reading Sinner…